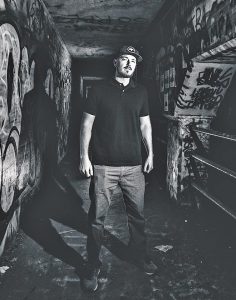 Benefit is an American hip hop artist and producer. He is known for being the first artist to go viral on the internet and have his music spread globally with no recording or marketing budget. (Link)

In 1999 Benefit created the album B.E.N.E.F.I.T using a $5 microphone and $12 sound card. He partnered with underground music pirates to have his music distributed across a network of underground FTP sites. His music spread throughout the internet, and went viral.

By 2000 Napster had emerged and exploded as a controversial peer to peer network for sharing music. In partnership with Chuck D from the hip hop group Public Enemy, Napster held a contest where artists would write and perform a song in support of the platform. (Link) Benefit entered the contest along with over 800 other artists. The uploaded songs were judged, and Benefit won the contest. (Link) His music went viral again on the Napster platform, and spread globally reaching millions of people.

Benefit’s music continued to spread virally through file sharing over the internet, and by word of mouth. In 2003 he released the Special Edition updated version of his original album containing additional songs. The album was again released by underground ripping groups and continued to go viral.

No one knew what Benefit looked like and very little was known about him. In the years following the release of his music, there were widespread rumors that he had died. (Link)

In 2013, Benefit resurfaced in an episode of the Vice/Noisey show “Live From the Streets created by Mr. Green and Sam Lipman-Stern. The episode featured Benefit and Matisyahu performing a new song called “Human in Disguise”. (Link)

Since resurfacing, Benefit has released additional songs and has been been featured on songs such as “Metal is Out” produced by Mr. Green on the album “Unpredictable” by Malik B of The Roots. (Link)

Benefit is featured in the upcoming Bloomberg documentary System Shock which chronicles the story of the MP3, and how it brought a multi-billion dollar music industry to the brink of collapse, but also paved the way for our modern digital lives. (Link)

Benefit often utilizes advanced rhyming techniques and multi-syllable patterns in his work (Link). His music showcases a versatile range of styles and content.